This is a final project for a class in the Spring of 2017 (Embedded Systems class).  I really enjoyed that class, and for the final project we got a lot of freedom to choose a PIC microcontroller and come up with a project (approved by Professor) on our own.  The following is the report contents for my project.  There's one bug in particular I want to squash, and which I have some theories on what could be causing it but I've got too much to do (work, social life, other projects, etc.).  It will false detect, and return a command code of 0xFF, I believe the LED is emitting IR light and tricking my IR receiver, but I haven't verified yet.  Anyway, this project works and I may expand it to do something useful like controlling a media system or something like that, with my phone or any NEC IR remote control. 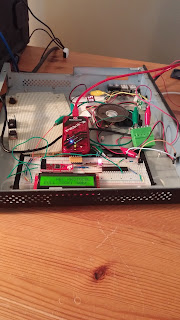 INTRODUCTION:
My project was to use a PIC18F27K40-I/SP 8-bit PIC microcontroller to receive an infrared (IR) signal from an IR remote (as well as one of my smartphones with an IR transmitter on it) using the NEC protocol, display that character or command sent to the receiver on an Liquid Crystal Display (LCD), and use pulse width modulation (PWM) to beep a speaker every time a command is received.
The IR receiver is a TSOP4838. The microcontroller is an advanced 8-bit device (18F PIC series). There is more memory and a few more ports on this microcontroller but it was not needed for this project. I wanted to be safe hardware-wise though. NEC Electronics was the company that came up with the protocol used, and that company is now called Renesas.
REQUIREMENTS:
The requirements for a single-person group was to use at 3 peripherals. The peripherals I used were digital I/O (IR encoding protocol for data), an LCD, and PWM. No more peripherals were added since I did not have the time to, but there is plenty of space for adding more. I was able to satisfy my project proposal and get the commands displayed on an LCD screen and beep every time a command was received.
HARDWARE DESIGN DETAILS:
Refer to the “Parts Used” section for what hardware was used. A schematic and layout of the hardware used is pictured below in Figure 1. An assortment of standard parts was used, a speaker, an IR receiver, a couple of resistors, an LED, a power supply, and LCD. A slightly non-standard part was a serial-to-LCD converter module. This allowed me to use only one pin for the LCD instead of 11, saving space to expand for other peripherals or features. 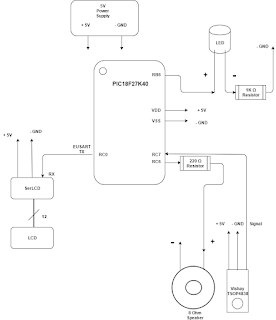 SOFTWARE DESIGN DETAILS:
The software was intentionally simplistic, using a polling method for the IR receiver in a while loop and no interrupts. I do all the initializing of the peripherals at power up:
Once everything is initialized, I have a while-loop that reads the IR pin. If the pin is high, I just wait until it goes low. I do this to make sure that I do not miss an incoming command, the timing is important. When the pin goes low I begin looking for a high pulse for 9 milliseconds. I do this with a counter variable and a delay function that is in one of the compiler libraries for the PIC. The function is “__delay_us()”, and it delays for the amount of microseconds put in the parentheses. After the 9 milliseconds high, I look for 4.5 milliseconds low. Then after waiting for that amount of time, I can start looking for the actual payloads in the message. First is an 8-bit address, then that address is inverted. After that the command is sent, then that command is inverted. I did not do any error checking but in a commercial product you would check each address and command to be sure they are total opposites of each other, before accepting the command. If the timing was for a logical 1 or 0, then that particular bit is set in an unsigned 32 bit variable. After getting the command, having a small delay for the beep of the speaker prevents “loop-back” or getting another command immediately after. It is a kind of “debounce”, like you would do for buttons. 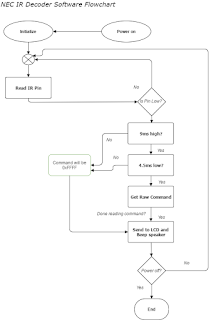 IMPLEMENTATION DETAILS:
The NEC protocol is a very popular IR protocol. It originally had an 8-bit command length, but those commands were quickly used up by vendors. An expanded 16-bit version was created, allowing for around 65,535 commands to be used. My decoder currently is only 8-bit however. The protocol starts with a 9 millisecond pulse high, then a 4.5 millisecond pulse low, then it begins with an 8 bit address, the inversion of that address, then an 8 bit command, and the inverted command.

EXPERIMENT RESULTS AND DISCUSSION:
I was having a little trouble getting the address for some reason, but for my remote I know it is 0xFF. Getting the command is the most important part and I know I was getting the correct command. An excellent IR library [7] for the Arduino platform was used to verify that my codes are correct. In the reference section below I will attach all the commands from the IR remote. I visually verified with the Arduino IR library that it was working with the IR transmitter on my phone, which has an application that can transmit just about all the IR protocols for TV remotes. The Vizio remote I use on my Android phone for a Vizio TV happened to be NEC protocol and works with the decoder.

Posted by Integrated MOSFET at 5:34 AM

Integrated MOSFET
I moderate all comments heavily, and don't login very often, so if you leave a comment, don't worry I'm not ignoring you. I mostly only log into this account to make a blog post. So sorry if it seems that way. Please leave a comment or email if you have questions/want to talk but don't expect a fast response. 9dsg52ljla9xlkjdmnwl2@gmail.com